I was absolutely dying to read this! Pre-ordered it on Amazon and then sat waiting on launch day checking and re-checking my 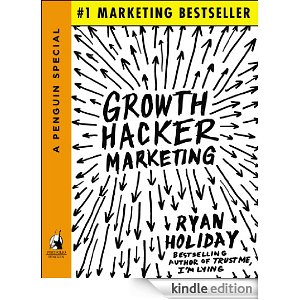 Of course I felt silly when I realised that NZ is a day ahead so launch day was actually… not until tomorrow.

I thought Ryan’s first book was a masterpiece (whether I agree with his methods/ethics is another story) in terms of how the media machine in America is working and how easily it can be manipulated by the likes of… well Ryan!

Growth Hacker Marketing is quite a different topic and style… much less controversial (a sneaky part of me would also say less enjoyable). Think less crazy media stunts and more… Seth Godinisms (my word) e.g. marketing is the product.

1. Start with the product
“You know what the single worst marketing decision you can make is? Starting with a product nobody wants.”

2. Growth hacking can be simple
Ryan gives the example of Hotmail who used Growth Marketing way back when… with the simplest idea ever (well probably not at the time)
“So put ‘P.S.: I love you. Get your free e-mail at Hotmail’ at the bottom of every email.”

4. It’s about the mindset, not the tactics
Ryan lists a host of coolio-wish-you-worked-there type businesses that have used the Growth Marketing mindset and while there tactics vary from free storage (DropBox) to Hotmail’s email signature (Apple now does the same thing with ‘sent from iPad’) he reckons that the mindset is pretty similar. And it’s this:

“More important than any of their specific tactics was the mind-set they all shared. Each followed the process I’ve outlined in this book: they merged marketing into their product development; they kicked off growth with early adopters; they added viral elements; and then they relentlessly repeated these cycles, always guided by the data…”

5. Don’t write your book in a cave
I love this one! Primarily because if I ever write a book I completely imagine myself hiding in a cave (aka my bed) and then emerging with the new Harry Potter.

Alas Ryan has set me straight! “In my experience, the books that tend to flop upon release are those where the author goes into a cave for a year to write it, then hands it off to the publisher for release.”

Instead he suggests continuing to change the book based on feedback right through the process of writing. He mentions authors who post snippets of their chapters in blog posts and seek feedback that way. Or who even test different cover graphics/titles. (Tim Ferris is one example).

A wee bit more
More about Ryan here. Yes he’s only 26 and is a best-selling author!! (jealous pause) He also has a reading list on his website and he’s made this cool SlideShare with pieces of the book: http://www.slideshare.net/ryanholiday/10-classic-growth-hacks

Wanna read it yourself? Sweet it’s on Amazon for only $2.99!

p.s. Google Stalk tip. If you want to research the companies that Ryan mentions in the book here’s a few: Hotmail, DropBox, Evernote, Airbnb, Uber, Apple, Amazon and Twitter.

← Insanely Simple: The Obsession That Drives Apple’s Success by Ken Segall
How to Write Perfect Press Releases by Steven Lewis →